Here We Go! Day One Attempting to Follow My New Goals…

Posted on July 8, 2015 by RieSheridanRose

Getting a later start than I would have liked, but I DID already wash a load of dishes and clean the sink. Unfortunately, I didn’t take any pictures, so it didn’t happen, right?

So we will start with a general tidy of the Guest Bath. It’s small enough not to be overwhelming, but it definitely needs a bit of a clean.

Just a bit of tidying

Not the best pictures, but I tried. Now, let’s give it a bit of spit and polish, shall we?

Whew. That was actually fun. I think I am pleased with the results. I decided to redecorate a bit, and it helped make things look much cleaner and brighter in there. 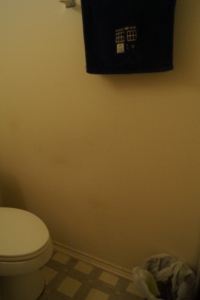 Clutter removal today: I made an appointment for Texas Paralyzed Veterans to pick up on the 25th of this month, and decided to put the candlesticks that were in the bathroom into the donation bags. That counts, doesn’t it? I made a decision and it will clear something away. 😉

Disorganization eradication: Well, that was easy. The drawer with all the cat stuff in it was full of outdated prescriptions and lids for containers that didn’t belong in there. Five minutes, and it was done. 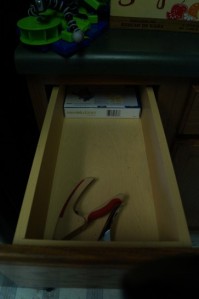 Now there is a place to put treats where Elf won’t get into them!

And, I admit it, that is the limit to my energy today. I didn’t get anything done on the office…again! But tomorrow, all of my goals will relate to it. I’ve decided. 🙂

So, there we go! Two blogs in a row. How productive of me.

Rie Sheridan Rose multitasks. A lot. Her short stories appear in numerous anthologies, including Nightmare Stalkers and Dream Walkers Vols. 1 and 2,  and Killing It Softly. She has authored twelve novels, six poetry chapbooks, and lyrics for dozens of songs. She tweets as @RieSheridanRose.
View all posts by RieSheridanRose →
This entry was posted in Uncategorized. Bookmark the permalink.

4 Responses to Here We Go! Day One Attempting to Follow My New Goals…