Getting a Late Start Today…

Here’s the current state of what we’ve done so far.

Still have a clean(ish) desk. I will admit that there were stacks of books piling up, so I moved them where they belonged. 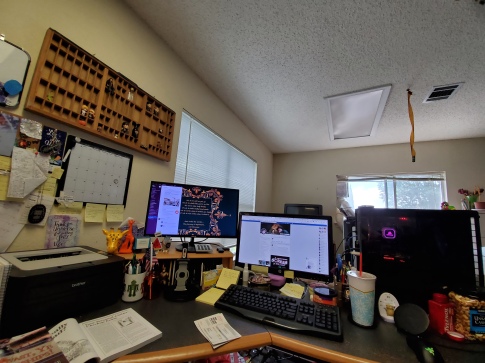 The books on the left corner are related to the week’s blogs, so they don’t count as out of place.

The bathroom counter is still neat. We did get a fountain for the cats because Newell didn’t want to keep filling the sink for them. They still aren’t sure about it. And that isn’t exactly where it will eventually go, but we have to get them used to it instead of the sink and gradually move it back over by the Terracotta Warrior in the corner… 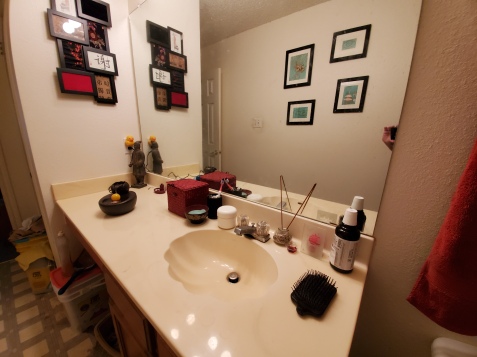 Today we are going back to the depths. That area under the desk continues to bug me, and I want to get it tamed. Here’s an example of why…look at the expiration dates on these: 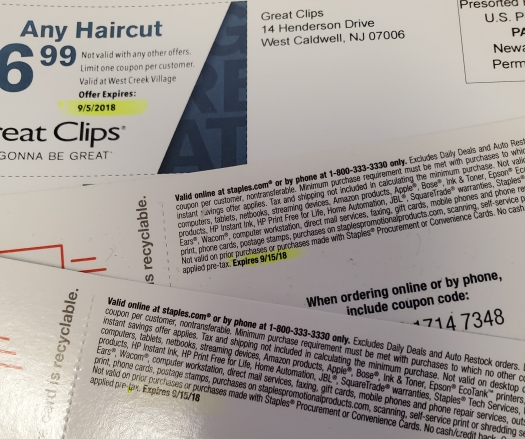 Obviously, I need to keep better track of coupons I might use, and if I don’t plan on doing it, toss them at once–or at least when they aren’t good anymore!

I wonder if a coupon organizer like this really helps? I tried clipping coupons for a while, but never really got good at it. I think it may be time to try again.

That doesn’t get the depths cleared away though, does it?

These have helped a lot: 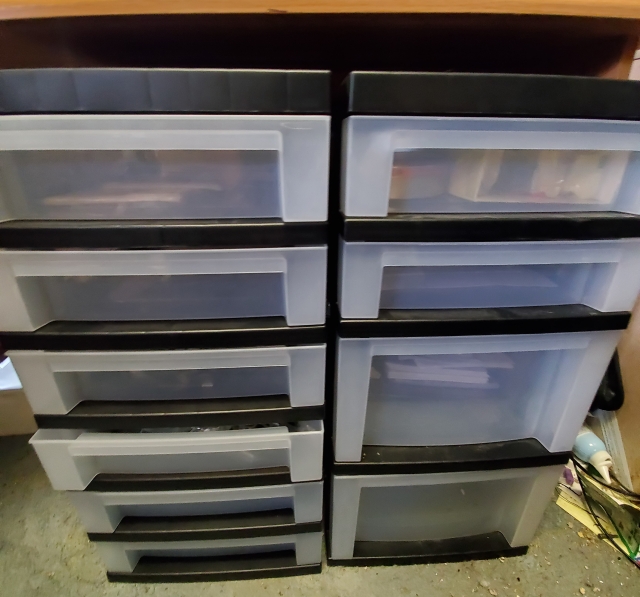 The four-drawer one is great because the big drawers are good for holding my idea notebooks and such that I need handy but not on top of the desk. The six-drawer one is still mostly empty so far, but it has my gaming headphones out of the way. (The link isn’t the exact chest, but basically the same in white.)

The goal is to get the underworld tamed to the extent that they can sit side by side under the left arm of the desk. To do that, I have to get this out of the way:

That doesn’t look like a big project, but to do it right and not have everything just drift back into it eventually, I have to sort through everything and throw out what isn’t necessary to keep and find better homes for what is left. I’m going to move the under-desk unit to the short side of the desk under the computer if it fits well to keep things I really DO need at my fingertips, like current game manuals or the post-it notes I use every day.

This is my project for the day because I really need to get some editing done. 😉

As you can see, it’s a bigger task than it looked in place under the desk! 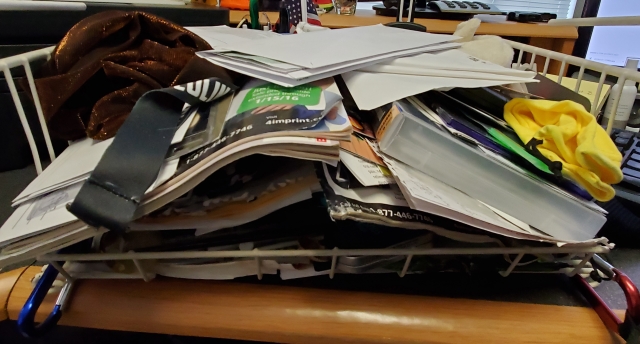 Well, time passed. Going through the under desk unit yielded most of a bag of trash, and clearing the space where I wanted to put the drawer set filled the rest. When I got the storage unit emptied, it turned out that it was too wide to use on that side without interfering with typing. 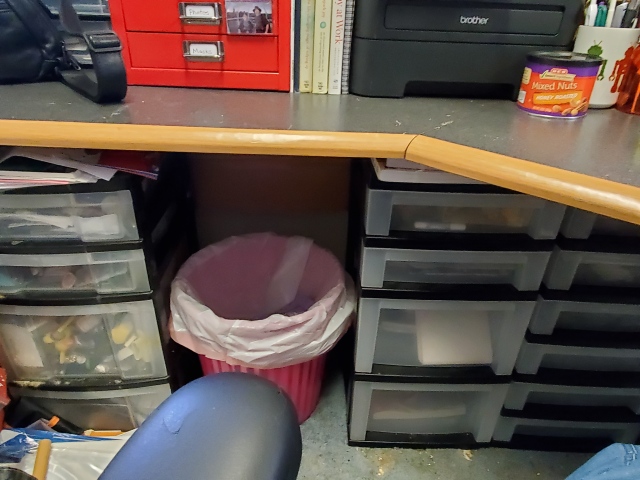 That’s okay, I will do without it.

I found a button that I bought for a friend several years ago and still haven’t delivered because I forgot all about it. I’ll have to see if I can get that to him someday. Though the way things are going these days, I might just keep it…I apologize a little bit for the language… 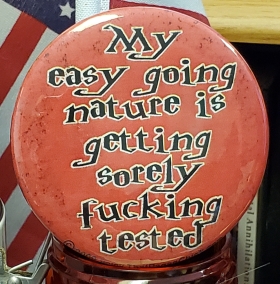 I found a frame that I could use for one of my trip photos of Newell from last summer. 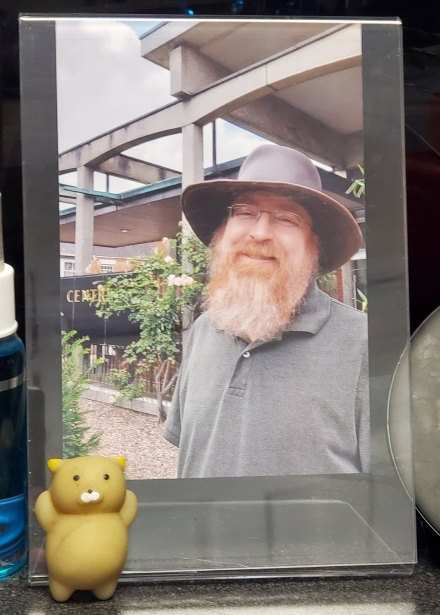 And now there is room under the desk for my under desk exercise bike which is close to this one, but not as fancy. 😉

Ignore that area behind the desk. One day at a time… 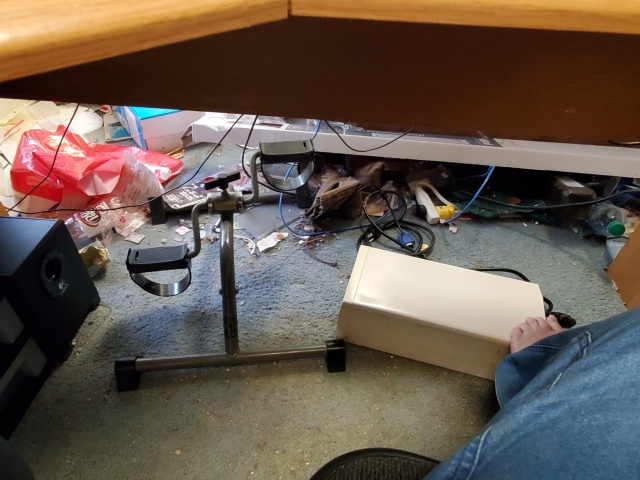 While this may not look like I got a lot done today, I feel that getting another bag of trash out of the house (and sweating like crazy by the time I did,) is a good step forward for the day, and now I can go edit with a “clean” conscience.

Rie Sheridan Rose multitasks. A lot. Her short stories appear in numerous anthologies, including Nightmare Stalkers and Dream Walkers Vols. 1 and 2,  and Killing It Softly. She has authored twelve novels, six poetry chapbooks, and lyrics for dozens of songs. She tweets as @RieSheridanRose.
View all posts by RieSheridanRose →
This entry was posted in cleaning, organizing and tagged blog, cleaning, decluttering, Here's the Clean, photos, re-organization. Bookmark the permalink.