First of all, I am extremely proud that after a week, my desk still looks like this:

(Which may still look cluttered to some, but remember where we started last week…)

Now, to tackle the Down Below:

Would you believe I hauled out several bags of trash yesterday? Yeah…neither would I. But I did!

I still haven’t gotten back to the principles of Marie Kondo yet, but I just need a bit of a refresher. The Life-Changing Magic of Tidying Up really did open my eyes to a lot of things. The problem was that I quit in the middle. I believe in her methods enough that I immediately bought Spark Joy when I finished the first one–maybe even before I finished the first one–and pre-ordered Joy at Work as soon as it was available. (Now I just have to make time to read it!)

Of course, if I followed her steps in order, I would still be working in the library right now, and that is not the area I need to focus on at the moment, so I am going to try and apply the principles to the chaos under my desk but not the structure. We’ll see if it works.

I need something to help me focus. Last week it was American Horror Story as I was gearing up for the RIEVIEW last Friday. Now I need something new. Sure enough, YouTube came through–with several Cleaning Marathon lists like this one. Or here’s another I think  I may like better.

Yeah, that one was better…but this is more my style…though it starts a bit slow for cleaning. It’s cool for sorting through trash though. I may have to buy the CDs after payday…splurged a little TOO much for my birthday on games.

Well, I ALMOST made it through the whole soundtrack. And it was from both movies…so I feel good about it. I had to remind myself that I can’t sit on the floor or kneel under the desk as long as I used to before I got old.

Two and a half bags of trash later, this is what I’ve got so far–and the things that found temporary homes on my desk during the sorting didn’t stay there. So, win-win…if tiny.

I may do more later, but I also have a lot of editing to do, so we will see… 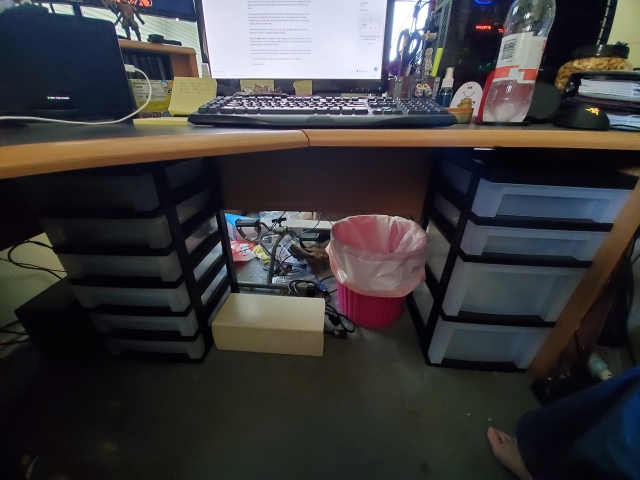 For now, at least. Maybe I’ll do some more after lunch…and some Tylenol. 😉

Rie Sheridan Rose multitasks. A lot. Her short stories appear in numerous anthologies, including Nightmare Stalkers and Dream Walkers Vols. 1 and 2,  and Killing It Softly. She has authored twelve novels, six poetry chapbooks, and lyrics for dozens of songs. She tweets as @RieSheridanRose.
View all posts by RieSheridanRose →
This entry was posted in organizing, Tips and tagged blogging, cleaning, housekeeping, music. Bookmark the permalink.