Posted on December 23, 2015 by RieSheridanRose

Those of you who have been following my cleaning blog for a while know that I am a HORRIBLE housekeeper. And it drives my sweet husband insane (though somehow, not enough to step in himself…)

He’s going to be off work for the rest of the year, so I thought I would do something special for him and clean up the spot we use most in the house–aside from our gaming computers.

First up, getting my birthday presents put away. (My birthday was in July…)

Getting better. Still a long way to go. The thing is, Newell likes to sit on the couch and snuggle. Hard to do when there is so much stuff in the way, but I have been using the living room as an office, because the TV is better. I know, I’m a hedonist. Still, now that I have basic cable in the office, I am going to be moving back to the actual office. Making the living room more functional for togetherness. 🙂 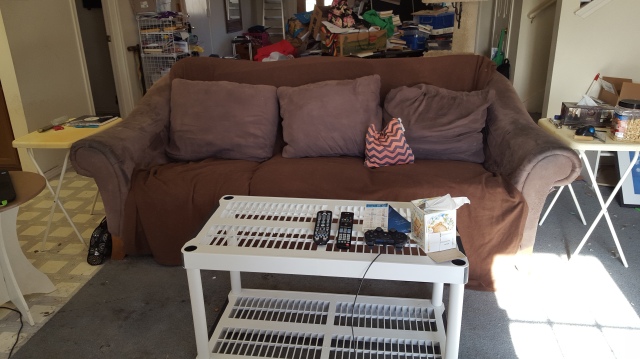 Much more inviting, no? Of course, there are still a lot of bags to go through, and things to file/sort/trash, but at least the couch is clear, the remotes are in reach, and there are trays to eat on. 😉

It’s been a real hard push to make sure it was done by the time he gets home for the year.

Rie Sheridan Rose multitasks. A lot. Her short stories appear in numerous anthologies, including Nightmare Stalkers and Dream Walkers Vols. 1 and 2,  and Killing It Softly. She has authored twelve novels, six poetry chapbooks, and lyrics for dozens of songs. She tweets as @RieSheridanRose.
View all posts by RieSheridanRose →
This entry was posted in General comments, Photographs and tagged Adrienne Rose, cleaning, Here's the Clean, housecleaning. Bookmark the permalink.