Any Progress is Better Than NO Progress…Right?

Posted on January 5, 2015 by RieSheridanRose

It feels like I got little done today, but I didn’t get to cleaning until after I blogged for riewriter.com, submitted today’s submission, discussed publishing details for the anthology…so, yeah. Doesn’t look like much, but several trips up the stairs and laundry in the washer too. I am exhausted! But I’ve lost weight since the beginning of the year. 😉

Today’s project was to get the ping-pong table uncovered. Sounds easy, doesn’t it? Well, no…:

It’s in the front hallway, and what feels like a logical place to set things down. Only, they seldom get picked up and moved along to where they go. Once it is clear, we are going to fight to keep it that way. I have vowed this to be so…in my own head, which is where it most needs to take root.

So, after several trips up and down stairs, and some sorting into places where things belonged, we have this:

Can you see the difference? I know I can. Now, you might be wondering about the piles of books, and why they aren’t put where they belong. I know Marvin was asking about them: 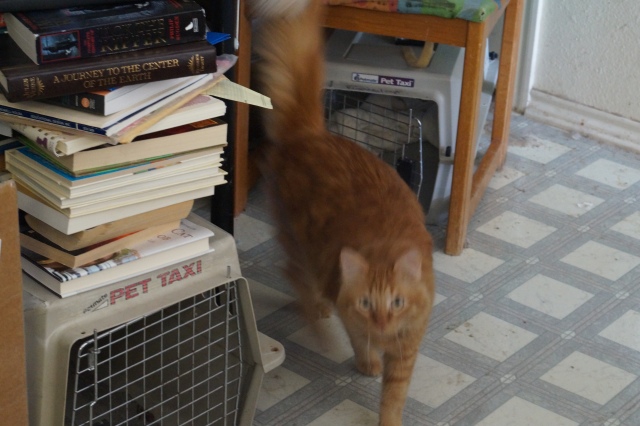 Well, can you see those double doors behind the table?

Once the table is cleared, I can get in there and put the books away.

Yes, there is much more to do, but at least a start was made. My back and I are feeling virtuous.

UPDATE: I got a little more ambitious. You can actually see most of the tabletop now:

(And what a difference the camera makes…this one is from my phone.)

3 Responses to Any Progress is Better Than NO Progress…Right?