Posted on February 12, 2013 by RieSheridanRose

Gave in and got a Writer’s Market today for the first time in years. It will come in handy if I can ever write something that isn’t speculative. Ralan works best for those. The best thing about the Writer’s Market is that it comes with a year’s subscription to the website too.

So I spent a while trying to figure out an agent to send Skellyman to, which wasn’t easy, because few take horror. I have one that sounds perfect picked out. Now I just have to get my synopsis and query perfect…

I got my three submissions out today, but may not make it every day this week, as I head to Dallas for ConDFW on Thursday and won’t be back till Monday. I’ll try to keep up with my blog posts though.

Worked a bit on a story that I had left in the middle over a year ago, and I am not sure where it was supposed to go. I think I know where it will be going now, but I don’t know if it was the original idea or not.

Catalogued my jewelry for the Con. I have a LOT of pieces. If they don’t sell, I should have plenty to put up on Etsy when I get back…

Dishes were all that got done. I know, I suck. 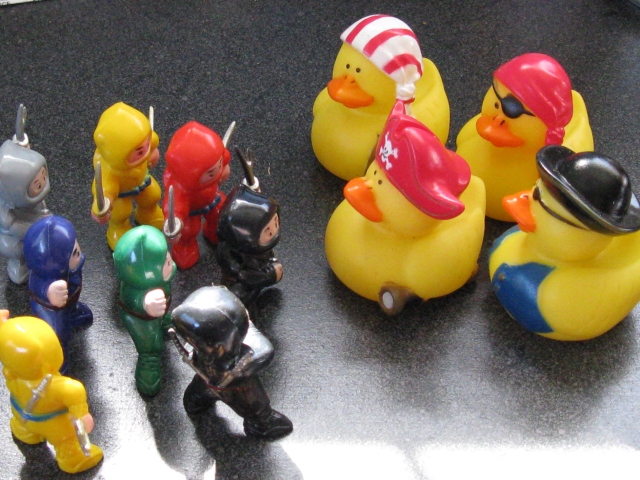 The Pirates and the Ninjas
got together to parlay–
There was lots of posturing,
upon that fateful day…
The Pirates claimed the water
the Ninjas claimed the land,
and neither group was certain
just exactly where to stand.
But once they started drinking,
things began to slide,
and in the end ’twas lucky
that no one up and died!

Today I wrote/revised ― synopsis for Skellyman, worked on short story