Yikes! (Again with the yikes…)

I opened up The Right Hand of Velachaz main file today to work on the revision a bit and I have a WHOLE lot more work to do than I thought. I was feeling pretty comfortable getting the rewrite done by December. After all, it was 45 to 50k, and only needed to be 55 to 60k.

The version that was published before was about 29k, and still needs to be 55 to 60k. That basically means doubling it. Adding a word here and a word there isn’t going to cut it. I need to reread the whole thing probably and re-plot it. Means no more goofing off if I want to have time for beta reads and still meet my deadline.

I think I know where my non-cleaning time is going for the next couple of months…at least.

But I do have a lovely new inspiration for my dragon Fieriluna: 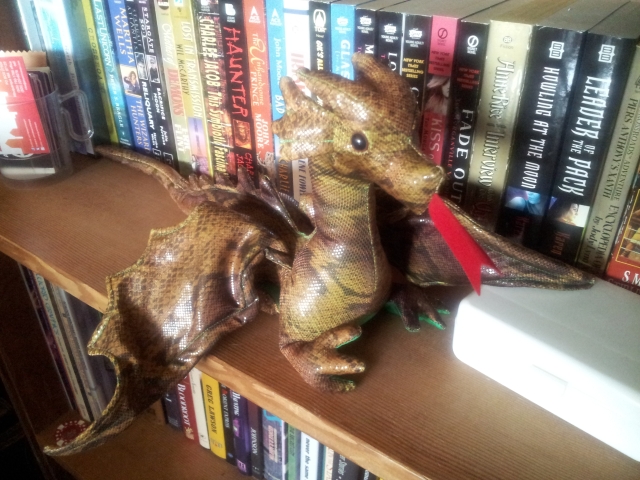 She was originally a red dragon, and the man who sold me this one kept calling it “him”, but  I think we are going to break the Gold Dragon stereotype on this one because she is so cool. And there is a bit of red to the scales…

Other than color, she is a perfect Fieriluna, and since I am adjusting the book, I can make her match. 😉

Rie Sheridan Rose multitasks. A lot. Her short stories appear in numerous anthologies, including Nightmare Stalkers and Dream Walkers Vols. 1 and 2,  and Killing It Softly. She has authored twelve novels, six poetry chapbooks, and lyrics for dozens of songs. She tweets as @RieSheridanRose.
View all posts by RieSheridanRose →
This entry was posted in General comments and tagged Adrienne Rose, chores, cleaning, dragon, Fieriluna, Here's the Clean, housecleaning, Rie Sheridan Rose, The Right Hand of Velachaz, writing. Bookmark the permalink.