Though that sounds like it was an accident, it is a fitting song title for this week, since I missed yesterday. Actually, I took the whole weekend off this week. I feel a bit guilty about that…the more you miss, the easier it gets, and I DON’T want it to become a habit, but there was nothing to talk about before I went to Georgetown on Saturday, and it was after midnight when I got home. Yesterday was spent in relaxing recuperation. I needed it. 🙂

So, Saturday…started off well enough. It was Mystery Readers day, so I went up in time for that with Newell to join me later for the reunion.

We carpooled to the meeting, and when we needed to move the van that we had driven over in, someone unfamiliar with the vehicle volunteered to back it out of the driveway. Unfortunately, it wound up in the garage of the house across the street. It was a true comedy of errors from the sound of things. I was inside most of the time, and only got details second hand. It did make for an interesting meeting.

Then I went back to Mom and Dad’s and waited for Newell and the reunion. It was held at Burger University — a fairly new restaurant in Georgetown. My burger was good, but their vegetarian options were a bit sparse. I think about 30-35 of the 144 classmates were there. My “twin” brother, Rufus — honorarily adopted by my Mom and Dad — flew in from California and did some of his stand-up. It was the first time I’d heard any of his stuff, so that was a lot of fun. After we ate and visited a bit, Newell, Rufus, his companion, my sister and I went back to Mom and Dad’s. It was a nice time, but driving home that late was a bit scary. 🙂

Like I say, Sunday I didn’t do much but play games and relax…but I did do some revisions on a story that I had sold to one of my publishers. It will be from my alter-ego, because it is one of my “Naughty Bits”. 😉

Here are a few shots from the reunion: 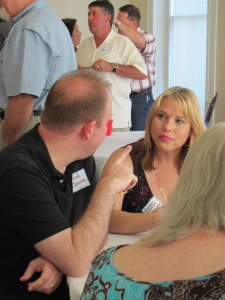 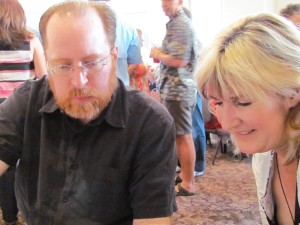 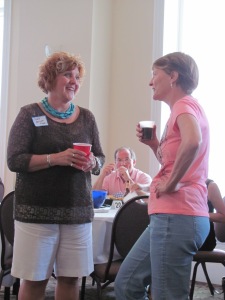 Everyone had a good time.

Rie Sheridan Rose multitasks. A lot. Her short stories appear in numerous anthologies, including Nightmare Stalkers and Dream Walkers Vols. 1 and 2,  and Killing It Softly. She has authored twelve novels, six poetry chapbooks, and lyrics for dozens of songs. She tweets as @RieSheridanRose.
View all posts by RieSheridanRose →
This entry was posted in General comments, Photographs and tagged Adrienne Rose, cleaning, Here's the Clean, housecleaning, newell, photos, pictures, procrastinating, Rie Sheridan Rose, writing. Bookmark the permalink.