Posted on May 5, 2012 by RieSheridanRose

Newell just called me crazy, saying the sun wasn’t up yet, and what was I doing getting up at 6:00 AM? Doesn’t he know people start coming for a Garage Sale VERY early in the morning? And my stuff is still sitting in the hallway, not outside… Silly man!

Anyway, about to go set up. I will post results as soon as I give up. 😉

Rearranged things pretty much constantly all day as holes appeared or the shade moved. Hot, tired, and ready to collapse. Was it worth it? $42 and a handful of change, plus I spent $5 next door on a really cool gadget my neighbor Kathleen had — it is a micro fridge that can plug in to the wall or the car. I am expecting to get a lot of use out of that when my Office is functional. And I treated her to a cup of lemonade that the little girl two doors down was selling, so that is another 50 cents. I made sure to have a glass of ice water the rest of the time, and I am still working on it now…really sweaty out there.

All in all, considering that most of my stuff was priced at 10, 25, or 50 cents, and that I had a couple of barterers and flat out gave a few things away, I think I did all right.

Pictures, or it didn’t happen, right? Here ya go: 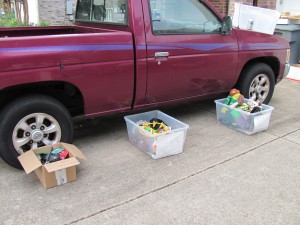 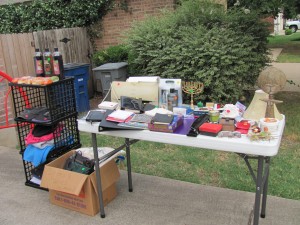 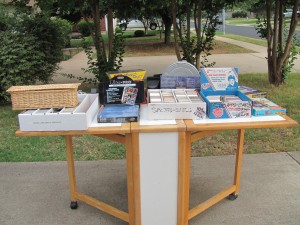 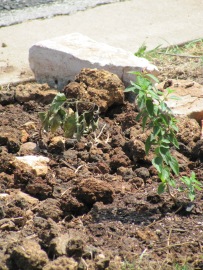 There’s another one in October. 🙂

Rie Sheridan Rose multitasks. A lot. Her short stories appear in numerous anthologies, including Nightmare Stalkers and Dream Walkers Vols. 1 and 2,  and Killing It Softly. She has authored twelve novels, six poetry chapbooks, and lyrics for dozens of songs. She tweets as @RieSheridanRose.
View all posts by RieSheridanRose →
This entry was posted in General comments, Photographs and tagged Adrienne Rose, clutter, Garage sale, gardening, Here's the Clean, housecleaning, newell, Rie Sheridan Rose, sorting. Bookmark the permalink.